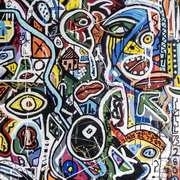 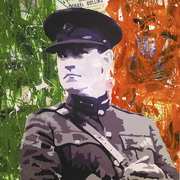 Music Is The Answer, Acrylic on Canvas, 40 x 30 inches 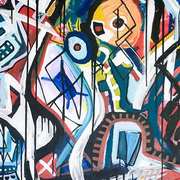 Journey so far…..
Cian has always been interested in Art and demonstrated his talent from an early age. He studied Art and Art Appreciation in College and has enjoyed numerous awards for his Art work and Photography work.

After putting down his brushes for 16 years it wasn't until 2011 that Cian began to paint and draw again due to the economic downturn and having being made redundant from his main job.

After finding work on the Job bridge scheme as a Studio Assistant in the Shanagarry Design Centre, Cian also began to take Art classes with painter Phil Davis who had an Art Studio in the Design Centre also. Being in a positive creative environment and being surrounded with creative minds contributed to relight Cian's passion for Art again and he quickly started to immerse himself into it by learning and experimenting with different styles and new techniques. Today Cian paints and draws with a wide range of mediums, mostly in Abstract, Experimental and Cubism styles, with influences that stem from Picasso, Pollock, Van Gogh and Jean-Michel Basquiat to name a few.

Cian's inspiration comes in the form of raw moments and instant ideas. He likes to diversify his content making each piece different to the other. Cian has already sold some of his pieces to private collectors and has a number of pieces on permanent display in restaurants and bars around the country. He has exhibited twice at The Shanagarry Design Centre and most recently had the opportunity for a solo exhibit at Lishh in Cork City.

'As an artist I now feel that I have total freedom in what I am doing right now. My goal is to create a unique experience for each individual viewer, enabling a single work to ultimately manifest a multitude of thoughts and emotions'