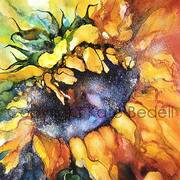 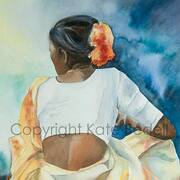 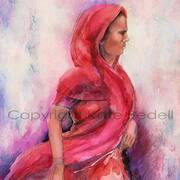 Kate Bedell, a third generation artist, studied at Dun Laoghaire School of Art and Design and graduated in 1984 with a distinction in Fine Art. That same summer, she discovered watercolours on a painting holiday in Cornwall, and since then has developed the techniques to incorporate mixed media and collage. Her subject matter is varied and comprises flowers, still life, landscape and nudes. She has exhibited in the R.H.A. Annual Show, the Mall Galleries, London, and at The Waterfront in Belfast. In 1999 she appeared twice on the Channel 4 T.V. programme, 'Watercolour Challenge'. In 2000 she moved to India with her family, and worked on a series of Sunflower paintings entitled 'Eternal Cycles'. While living in Bangalore for 7 years she did a series of exhibitions of paintings of Indian Women.

Kate Bedell is a member of the Watercolour Society of Ireland, The Dublin Painting and Sketching Club, The Ulster Watercolour Society, and the Ulster Society of Women Artists. Through these national societies, Kate has won four prestigious awards for her work. In 2013 she exhibited her work with the USWA in Stormont to celebrate International Women's Day. website www.katebedell.com