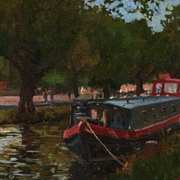 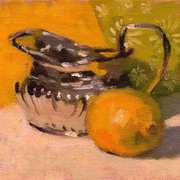 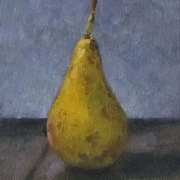 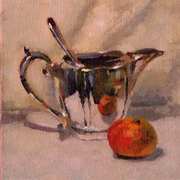 Kevin McSherry has worked as an award-winning artist and editorial illustrator for the past twenty five years. He works and teaches in Dublin where he paints a small demonstration still life or landscape study for his students at the beginning of every class, as shown here.

He relates his narrative-laden paintings. (Seen on www.mcsherry.ie) sometimes with humour, other times more darkly. His incredible works play with the viewer's imagination and wit, stretching both with his intentionally absurd compositions. He paints to "communicate, include, subvert and opine" and his pieces, as a result, are thoroughly enthralling, drawing the eye and mind into his world.﻿

Kevin's pieces have been exhibited in galleries in London, Paris and Dublin and major Irish cities. He has also been involved in shows in le Louvre, Paris and the Chester Beatty Library, Dublin. He is a founder member and former Chairman of the Illustrators Guild of Ireland. His work hangs in the British National Collection.