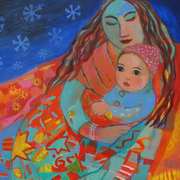 Children at the Seaside, acrylic on canvas, 50 x 50 cm 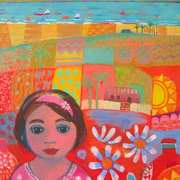 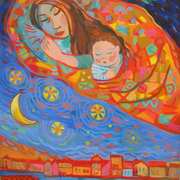 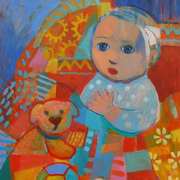 Autumn Singing in the Tree, acrylic on canvas, 60 x 60 cm

Marja van Kampen was born in The Netherlands. She is a full-time painter and printmaker, receiving her degrees for Painting, Printmaking and Art History from the Akademie voor Beeldende Kunsten in Arnhem, The Netherlands, in 1972. Having practiced her art there for a number of years Marja travelled through Europe and settled for a while in the South of France before moving to Ireland permanently in 1982. She now lives in Enniscorthy, Co. Wexford.

Her work is in many public collections including The Arts Council of Ireland, the Office of Public Works, Microsoft Irish Art Collection, AIB and Áras an Uachteráin, the residence of Michael D. Higgins, the President of Ireland. She is the recipient of several Awards, the most recent a Travel Award from the Arts Council to study American expressionistic painters in New York.

My paintings explore themes of childhood including elements of landscape, either local or foreign. Strong influences are images and curios I have collected on travels abroad, particularly India, where vibrant colours and patterns have incorporated an Eastern feature to my work. I enlarge elements, distort proportions and discard perspective introducing a playful imagery to give my work a light-hearted quality.