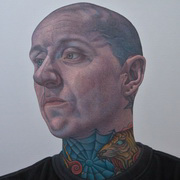 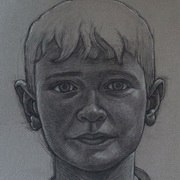 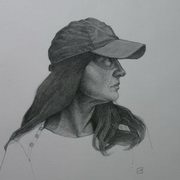 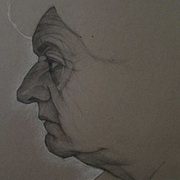 Connor Maguire was born in Belfast, Northern Ireland in 1977. A former pupil of De La Salle secondary school, Connor attained all his exams at GCSE and ALEVEL and continued on to study at the University of Ulster in Belfast then taking a year away from his studies to work and travel where he spent a period of time in New York working in the United States.

Returning home Connor has now been working steadily as a freelance artist specialising in Painting from watercolours to oils, Printmaking in the form off Woodcuts, Linocuts and Drawing in charcoal and Graphite. He is an expert framer and mounts and crafts all his own work. Connor's paintings are inspired from anything ranging from everyday events, personal experiences, friends or family or just an idea off what something is.

After his first solo exhibition in the Down Arts Centre in May 2003 he has continued to exhibit taking part in solo and several group shows alongside Irelands most respected artists such as Neil Shawcross, Basil Blackshaw, Carol Graham and many other acclaimed painters recognised throughout Ireland.

His work has been praised by collectors and painters alike and takes honour in saying that one of his works is in the collection of famous artist Jim Fitzpatrick who has worked with established musicians such as Sinead O'Connor, Tori Amos and Ash.

Connor's work has also been published by Californian fine art company featuring in a book entitled 'Creative minds'. Winning the Chairman's award in 2003, Connor has gone on to win the 'Stephens Award', 'Anna Cheyne Award' and the 'Carnathan Galleries Award' amongst others. He is the youngest member to gain membership to the Ulster Watercolour Society and exhibits on an annual basis with his paintings selling in each show.

After exhibiting in Hillsborough Castle he has received a personal letter from Prince Charles of Clarence house congratulating him on his participation and contribution to 'The Prince's trust' after representing his charity in the event.

He has produced a limited edition range of work making his images more accessible to the public in the form of greeting cards and limited edition Giclee Print range which are available throughout several retailers in Northern Ireland such as the Wickerman in Belfast and Painted Earth in Newcastle.

In his own words: 'I originally became interested in art at an early age where I would watch my Grandfather sketch and draw out ideas for projects as well as for the mere pleasure of drawing. My Grandfather an accomplished Draughtsman, Carpenter, Designer and Watercolour painter introduced me to pencil drawing and charcoal.

Inspired and captivated seeing what he could accomplish with a pencil and a paintbrush I too attempted to paint as good as he did and believe I'm still trying'. 'Over the next year I am hoping to concentrate a lot more on portraiture and introducing more figures into the paintings with a more realistic finish. Perhaps working on a larger scale. Who knows? At the moment I am still experimenting with a lot of different things and searching for what works best. I guess I will just wait and see what happens.'

Recently Connor has been interviewed and taken part in BBC Radio 4 programmes talking about his work with broadcasting Journalists Perminder Khatkar and Helen Marks. He was shortlisted as Artist of the year in 2013 in association with Artist and Illustrator Magazine exhibiting in Londons prestigous Mall Galleries alongside some of Britains greatest Artists.

He has also recently taken part in another show involving some of Irelands finest artists in the MAC Theatre in Belfast in March 2014. Connor's work continues to progress and develop and continues to exhibit in galleries throughout Ireland. Past Upcoming Exhibitions and Gallery Representation