Santa Maria Della Salute From The Piazzetta, Casein tempera on board, 18 x 24 cms 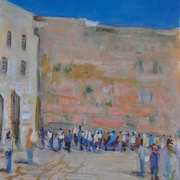 David Goldberg began painting when he was about 7 years old. His first teacher was a wonderful lady, named, Maud Bennet, who lived in a large ramshackle house on an island in the estuary of the River Lee. Later, after David had studied and qualified as a Barrister, he went to study with Peter Garrard PPRBA, NEAC, RP. They became very close friends and Garrard and a major turning point in David's development. In more recent years he worked briefly with Jeff Reed and Randal Exxon, both from Philadelphia. More importantly he has enjoyed the great encouragement and critical eye of Thomas Ryan PPRHA.

In 2014 David was elected a member of the Dublin Painting and Sketching Club. In 2015 he was elected an Associate member of the United Society of Artists, London. He will exhibit with the Society at the Bankside Gallery during their annual exhibitions. He also attended the Berlin-Brandenburg Plain Aire event in May 2014, and was awarded a first prize for interpretation of landscape. He exhibited at Himmelpfort and Furstenburg.

Paintings are available from the Studio by appointment.

David's principal interest is plain aire, and he paints with the Boyne Valley Plein Eire group. He endeavors to render the atmosphere and mood of places rather than the literal interpretation of them. He also paints still life and the figure, as well as portraits.