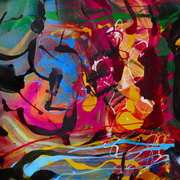 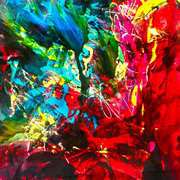 He has had exhibitions in Dublin, London, Ibiza, Amsterdam and New York. In 2007 his What Colour Are Kisses? exhibition sold out completely within 48 hours. He has had gallery shows solely dedicated to his work in Dublin, Donegal, Mayo, Boyle, Ibiza and London's Mayfair. His painting Roisin raised 26,100 euro in 2008 for People in Need in the RTE Telethon. His work has included 'Pierce Brosnan's Arse', Samantha Mumba's bust and 'Moolah' (a life sized cow covered in 50,000 euro of real banknotes during the height of Ireland's Celtic Tiger phenomenon).

More currently, his Public Enemy Number One exhibition was on a twelve date tour of the world (including New York, Tokyo, Rome and Rio de Janeiro). The exhibition features amongst others Jordan as Myra Hindley, Barack Obama wearing Ku Klux Klan robes (made from U.S. flags), the Pope marrying a gay couple, a Black Bono and Angelina Jolie and Madonna passing each other in a supermarket aisle pushing trolleys full of multi-racial children. Sharkey is also an interior designer of commercial and domestic interiors in Ireland, the UK, the US and Spain. One of his design projects featured in RTE's Celebrity Showhouse.