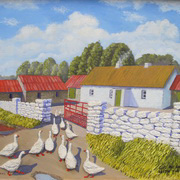 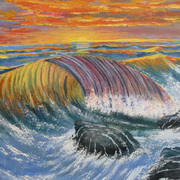 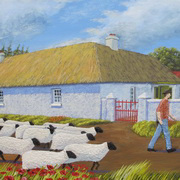 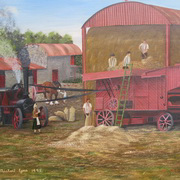 When I was in primary school, the headmaster placed as an appropriate backdrop to the two school fish tanks, two seascape paintings which I composed. When I was about 14 years old, I watched on TV an artist paint a fine art picture of some sea birds. I thought his artwork was great, something which I would like to do.

In my younger day I had a great interest in motorsport, which brought me to the British F1 GP on two occasions. While there, I saw prints of paintings by the motorsport artist Michael Turner. I thought his artwork too was great, again, something which I would like to do.

In 1984 I went to Australia, where in 1985 I got some photos from the first Australian F1 GP. From those photos I started to paint my first paintings of GP cars. I also took some art lessons in how to paint landscape. After completing a few paintings featuring GP cars, I decided to do like Michael Turner, take prints from the paintings, while hoping to sell them. The Aussies showed little interest in my artwork, though while in Australia, on commission, I did complete two paintings of cars, Ayrton Senna in his F1 GP Lotus, and a Renault Gordini.

Today I still like to paint scenes of traditional Ireland, along with anything I find tranquil, or else inspiring. Some of my oil paintings are very heavily layered with paint up to 12 mm thick; this perspective to me gives a painting a much more interesting 3D dimension. I have also completed some more paintings on commission since returning home. When at home in Ireland I have lived most of my life in the countryside of north west Co. Offaly four miles from the village of Ballycumber. I do not have an art gallery, though my paintings, along with some prints of my paintings are exhibited here throughout the house.